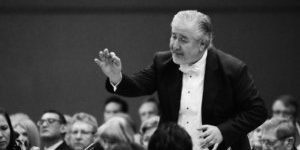 A recipient of the 2012 “For the Love of Art” Lifetime Achievement Award, the 2012 “Man of the Year” award by New York-based Madison’s Who is Who, and the 2014 Sigma Alpha Iota International Music Fraternity’s National Arts Associate award, Maestro Hector Guzman is Music Director of the Plano Symphony Orchestra, the Irving Symphony and the San Angelo Symphony in the United States. In 2004, he was declared winner of the “Seven Conductors-One Baton” International Conducting competition and appointed Music Director of the Jalisco Philharmonic in Mexico. Since 2010 and for the first time in its history, the Jalisco Philharmonic named him “Conductor Emeritus”.

As a guest conductor, Maestro Guzman has appeared with all of Mexico’s most prestigious orchestras: National Symphony, State of Mexico symphony, UNAM Philharmonic, Xalapa symphony, Bellas Artes chamber orchestra, Mexico City Philharmonic, Vivaldi Orchestra of Mexico City, and many others, as well as the San Antonio, Dallas, Wheeling and Phoenix symphonies and the Chicago Sinfonietta in the United States, the National Symphony of the Dominican Republic, the National Symphony of Panama, the Collegium Orchestra of Prague in the Czech Republic, the Rszezow Philharmonic in Poland, the Japan Philharmonic, the Masan Philharmonic, and the Gangnam Symphony in South Korea, Italy’s Amadeus orchestra, Sinfonia Venetto, Milano Classica Orchestra, Bari Symphony, San Remo Symphony, Pomeriggi Musicali Orchestra of Milan and the Sinfonica de Murcia, Joven Orquesta de la Comunidad de Madrid and the Excelencia Orchestra in Spain. He made his operatic debut in 2005 with Rossini’s Barber of Seville and his performance of the opera “Frida” in 2007, was considered the “best opera of the year” by the Mexican press. He has also appeared as soloist and recitalist in venues such as the Meyerson Symphony Hall in Dallas, the Spivey Hall Distinguished Artist Series in Atlanta, Olivet Nazarene University recital series, the cathedrals of Morelia, Guadalajara, Chartres, and the 2015 International Music Festivals in Toledo, Spain and Zamora, Mexico.

In his native Mexico, Hector Guzman achieved an impressive reputation as an organist studying with Victor Urban, by taking first prize in the “Chamber Soloists” and the “Manuel Ponce” national organ competitions. In the United States, while a student of world-famous master teachers Alfred Mouledous and Robert Anderson, he earned the further distinction by winning solo competitions at Southern Methodist University and the University of North Texas. In 1978, he gained world acclaim when he became the first Latin-American ever chosen as a finalist in France’s “Grand Prix de Chartres”- the world’s most prestigious international organ competition.

Mr. Guzman holds degrees from the Conservatory of Music in Mexico City, the University of North Texas, and Southern Methodist University and has studied with many illustrious conductors including his mentor Anshel Brusilow, and well as Helmuth Rilling and Carlo Maria Giulini at the Accademia Musicale Chigiana in Siena, Italy. For several years, he was a protégé of the late Maestro Eduardo Mata, Conductor Emeritus of the Dallas Symphony Orchestra.

In demand internationally as a conductor and recitalist, Maestro Guzman was accorded the “Outstanding National Young Artist” award from the government of Mexico, the “Golden Lyre” award, given by the Mexican Union of Musicians, the “Meadows” award from SMU, the DeVry Institute’s “Director Par Excellence” award and in 2000, he was included in the “Outstanding Musicians of the XX Century” magazine, published by the International Biographical Centre in Cambridge, England.

In 2004 he received the “Silver Good Citizenship Medal” from the “Sons of the American Revolution”. The 2005 “Artistic Merit Medal” was awarded to Maestro Guzman by the Government of the State of Mexico and was also the recipient of the 2006 “Artistic Silver Medal” awarded by the government of his native state, Zacatecas, Mexico. In 2008, he was the recipient of the Mozart Medal, the highest musical honor in Mexico, awarded by the Embassy of Austria and the Mozart Academy in Mexico City.

In October 2015, Maestro Guzman was the first musician to receive the Addison Hispanic Chamber of Commerce MITO award for his outstanding contributions to music worldwide and the arts in North Texas.